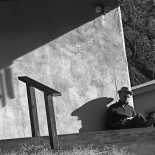 I interrupted a sweet bucket drum groove to talk with Thomas Brown, a Portland musician who lays it down with plastic buckets and accents from the nearest street pole. Sometimes he draws a big crowd, occasionally he deals with haters, but he’ll keep the groove going all day with a smile and lots of love for his listeners.

On spending time on the street playing: “I love music, it’s one of my passions, and it also helps me support my family. I play buckets and get a few tips out of it, but mainly it’s my passion. Sometimes I get a big crowd, sometimes I get people complaining. There are a few haters out there but I still gotta show the love of Christ toward them even though they might not like what I do. I still show them love and it might even make a difference in their life.”

On learning: “I grew up playing regular drums. I started playing in church, around the age of five. I’m pretty much self-taught, and I learned by watching other people and being inspired by many other musicians.”

Finding motivation: “It’s a gift from God that he’s given me, and it’s just the passion when I’m playing. He downloads different beats through me, so it’s inspiration to people I know but it’s also inspiration to me and it gives me strength when I play to know that I’m making a difference in someone’s life. It they’re feeling down, when I play I might put a smile on someone’s face.”

Interacting with listeners: “It keeps me moving to get a response out of people, encourage them in a way. Not literally, but I know it’s encouraging them because it’s bringing out an emotion that they might not have been feeling at the moment. Somebody will come by and start dancing, or just groove to the beat. It’s spontaneous, spontaneous rhythm.”